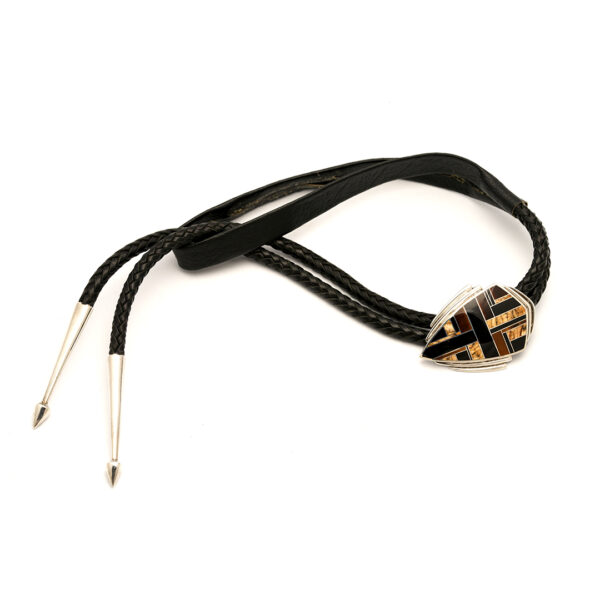 The bootlace tie; the bola tie; the cowboy tie; the gaucho tie; the bolo tie goes by many different names and has several different variations. The basic concept, however, remains the same across them all. A thin, string-like material (laced or braided) is clasped together by a slide, through which the string is strung using tips at the ends, and voila—you have a bolo tie.

But where did this casual style of neckwear get its start? And how did it become the classic, yet sophisticated fashion accessory that it is today? Let’s take a look.

There are several accounts of the origins of the bolo tie.

Most people believe the origin story that Manny Goodman, the owner of a New Mexico craft store in the 1930s, put forth about the bolo tie. He observed local Navajo, Hopi, and Zuni men wearing bandanas clasped around their necks with a shell or silver conch, with ends holding it together and used to adjust the fit.

Other sources credit an Arizona silversmith named Victor Cedarstaff. Victor’s story goes that he was once chasing wild horses with a few friends when his silver-bordered hatband slipped off and his hat flew away. When he retrieved the hat, he placed the band around his neck for safekeeping and his friends complimented the look, giving him the idea for the bolo tie. Some people believe the bolo tie design originated with the Native Americans, while Victor was the first to claim and commercialize the idea.

The bolo tie has become a staple of both American Indian and Western American culture.

The cowboys of the southwest in the 1940s felt that the casual, rugged look of the bolo tie reflected their lifestyle well. Native American silversmiths in the area also took to the bolo tie, considering it an opportunity to express their individuality and creativity. These Native American artists are responsible for the bolo tie becoming a distinguished piece of fashion, particularly because of the beautiful stones, metals, and unique, intricate designs they used for the clasps.

The bolo tie was further popularized through its presence in TV, movies, and celebrity wear from the 1950s through the 1980s and beyond. Arizona, and later New Mexico, even designated the bolo tie the official neckwear of the state.

At Faust Gallery in Scottsdale and Santa Fe, we have a fine collection of bolo ties that have been carefully handcrafted by authentic American Indian artists. With a varied selection featuring different metals, stones, and designs, you’re sure to find a tie you’ll be excited to display in your art collection or around your neck.

Browse our bolo ties and other Native American-made jewelry online or at one of our galleries today!