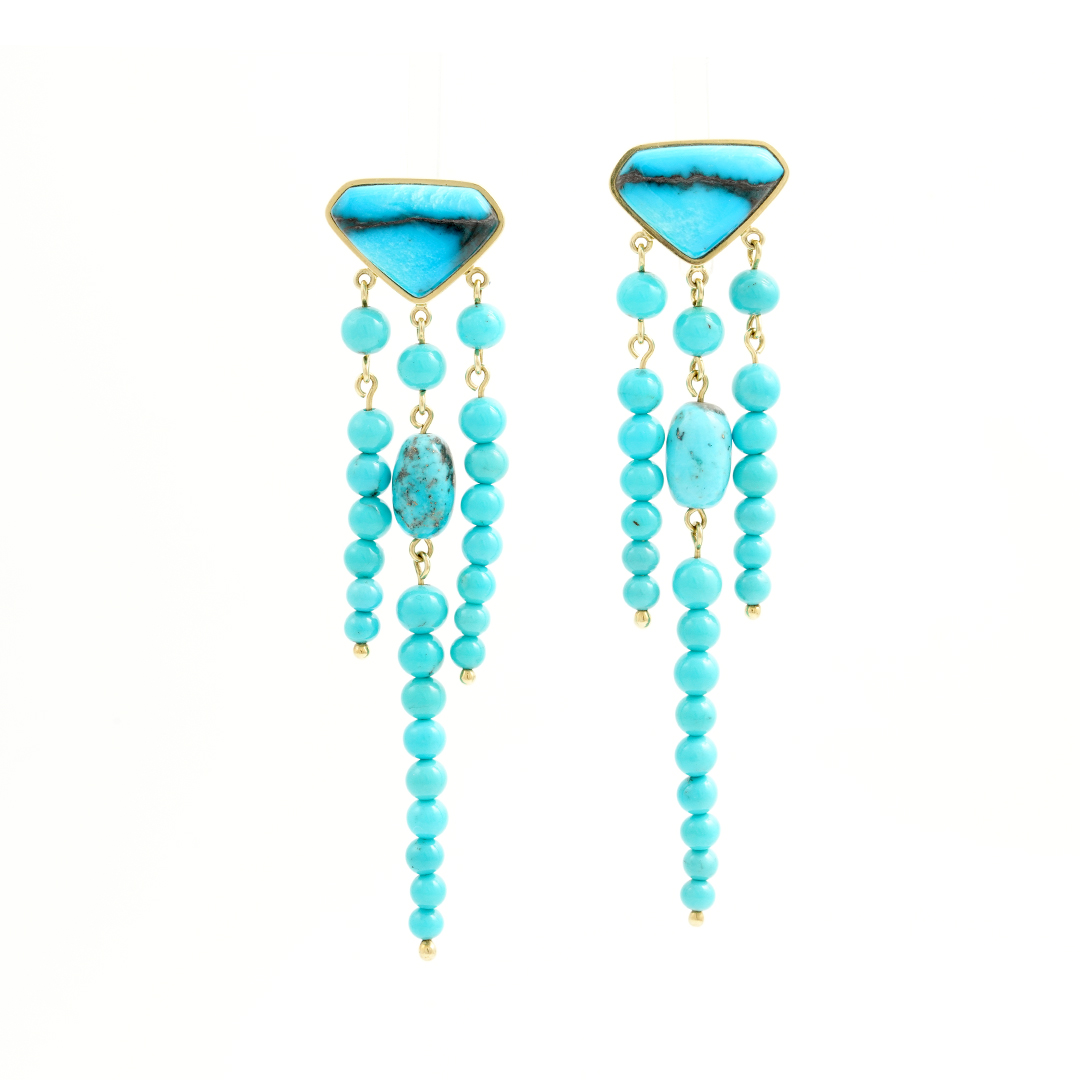 Native American art has largely been shaped by the natural resources that were available and used by early American Indian artists. Berries and minerals were used to make paint; mud was hardened to clay to make pottery; and stones from the earth were mined and refined to create beads, pendants, and other pieces of jewelry.

One of the most widely used and recognized stones used in Native American jewelry, pottery, and other mediums, is turquoise. But why is this particular stone so prevalent and beloved among the Native American people?

In Native American culture, turquoise is considered a stone of great power.

Turquoise changes color depending on its environment—aluminum turns it green, zinc gives it a yellowish hue, sunlight and weather lighten it to a paler blue. Because of these color-changing qualities, turquoise came to be known as the “living stone”, representing life and the different hues of the earth. It is believed to bring strength, protection, and vitality to those who carry it.

Turquoise plays a role in many Native American myths.

The legends surrounding turquoise have contributed greatly to its reverence and mystical power across American Indian tribes. The Navajo, for example, believe that when rain finally fell after a long drought, human tears seeped into the earth and formed turquoise. The goddess Estsanatlehi was even said to be born from it.

The Apache believed turquoise filled the pot at the end of a rainbow. In the Hopi tribe, turquoise was thought to be the excrement of a lizard who travels between the “above” and “below”. These are only a few of the many roles turquoise has played in Native American mythology.

Native Americans used the turquoise stone in many different ways.

The most well-known use of turquoise in American Indian art and culture is in jewelry-making. Tribes fashioned the stone into wearable forms—necklaces, pendants, bracelets, rings—so they could carry its powerful qualities with them. Turquoise jewelry was used widely in trade.

The stone was also hung from the ceiling or placed in baskets round a household to protect its members from evil. Hunters even attached it to their bows to bring them strength and skill in the field.

If you’re interested in harnessing the great power of turquoise, or just admiring its unique beauty, the Faust Gallery has an extensive selection of authentic Native American-made jewelry featuring this stone and many others. Whether it’s a necklace, earrings, belt buckle, bracelet, ring, or other one-of-a-kind wearable piece you’re looking to add to your collection, we have something for everyone looking for their own turquoise token.

Head to one of our galleries to see our favorite pieces on display or to our website to browse the incredible collections of American Indian art we have for sale!