Have you ever looked at a Native American painting and wondered how the artist is able to so beautifully infuse culture and meaning into every brushstroke? It’s impossible not to admire the way Native American art, and the culture itself, passionately weaves poignant and prominent symbols into everything it produces. 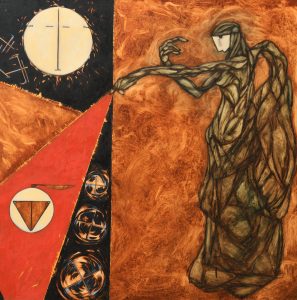 Symbols permeate every aspect of the culture, so it’s no surprise that American Indian artists create pieces rife with images of deep significance to their beliefs and perspectives. They use symbols to tell stories; each one represents a unique aspect of life, the human spirit, and nature. In Native American culture, nature is particularly sacred, and the importance of being in tune with the natural world is perhaps the theme in which nearly all American Indian art was once rooted.

So where do we begin with such a vast and meaningful field to consider? Well, we thought it might be useful to hit on the major role that symbols play in Native American culture, in order to better understand how they function in art.

We hope to give you the opportunity to not just appreciate the beauty and value that Native American art has to offer, but also help you to interpret the message behind their designs—so you can invest in the pieces that you connect with the most!

How do symbols get their meaning?

The meaning behind an American Indian symbol is almost always rooted in nature—both its larger significance and the design of the character itself. Each symbol is an attempt to extract meaning from the natural world, and a device used to gain strength, insight, and reassurance from the spirit of all things. This spirit is harnessed and integrated, along with its symbol, into all aspects of Native American life.

While prominent symbols generally retain their meaning throughout Native American culture, there is often a difference in exact interpretation and understanding from tribe to tribe, or even person to person. Symbols may derive from foundational legends, religious beliefs, or even icons and creatures featured in American Indian storytelling.

Certain images may have multiple meanings—such as the arrowhead that can represent both alertness and the weapon itself, or the owl that signifies wisdom as well as nighttime and good hunting skills. They may be inspired by a hallowed animal, a natural event or element such as a thunderstorm or fire, a celestial body, or a divine power. Symbols may be understood universally or used to communicate privately within a family or tribe.

The true meaning of each Native American symbol may never be known—a single, accurate meaning for a character may not even exist within the culture. Interpretation is always subjective to personal and historical context, which is why Native American imagery can ultimately mean whatever you want it to.

What are some common Native American symbols?

American Indian symbols, as we mentioned before, are a language in and of themselves. There is no master list that chronicles each and every character or image ever used in Native American culture—and if there was it would be incredibly overwhelming to explore. These are just a few interesting symbols we’ve highlighted that tend to appear frequently in American Indian culture and artwork:

An arrow symbolizes protection and defense. It can be used in different variations to signal war or alertness, ward off evil, provide direction, and—if broken—even indicate peace.

Depictions of the sun are also referred to as the Zia symbol. The sun symbol means “Earth’s Guardian,” and represents healing energy and warmth. The sun is the giver of life, energy, and spirit.

The bear is a sacred animal in American Indian culture. It has many meanings that are often based on spiritual and physical power, and courage. The bear claw or track is also a considered to be a good omen—often used by those seeking leadership, as a source of strength.

While the circle symbol has various meanings throughout different tribes, it is generally understood to represent the four natural elements: water, earth, wind, and fire. It’s associated with cycles, such as the changing of the seasons or the natural cycle of death and rebirth.

How are symbols used in Native American culture?

Throughout history, American Indians have used symbols to represent the deeper meaning they assign to all aspects of life. These images are integral to the way in which Native Americans live and communicate; they are the manifestation of how they understand the world. Symbols are tools not just to convey significance, but to create it too; they are a means for Native Americans to communicate with each other and with the natural world they revere.

Symbols have historically been used to record and share ideas, beliefs, and events. They may function as directions to an ideal hunting spot or explain why the sun rises in the East and sets in the West. Native Americans have created an entire language with symbols. They are a tool for sending messages within and between tribes, expressing ideas, spreading mythology, and describing objects and their spiritual essence.

Aside from being used as a functional language, Native Americans also incorporate symbols throughout their artwork to express the different perspectives on life they maintain, as well as to connect to the world and the people in it on a spiritual level. They’re featured in all types of art—paintings, drawings, tattoos, pottery design, sculpture, totems, and even war paint—to depict meaning, provide inspiration, and tell a story.

The influence of symbols and their meanings on Native American art is incredibly palpable and prominent throughout history. American Indian artists continue to use them to embody their culture and connect to the spirit of the natural world.

To witness the most unique, personal, and authentic representations of Native American imagery for yourself, check out the Faust Gallery’s current exhibits and events—online or in person in Santa Fe, New Mexico, and Scottsdale, Arizona. Contact us today to connect with artists and find a piece that speaks to you and your spirit!