Body art has been a popular cultural tradition long throughout history in societies all over the world. Tattoos in particular have become one of the most prevalent forms of body art and modification. In fact, around 45 million people in the U.S. alone had one or more tattoos as of 2012!

While it is growing in popularity today, tattooing is a practice that goes back for centuries and has been widely used by ancient peoples in Polynesia, Egypt, North America, and many more areas. American Indian tattoos and their meanings have been greatly influential in other forms of Native American art—such as pottery, jewelry, and sculpture among many others.

Let’s take a deeper look at the unique depiction of identity and culture that can be found in the Native American tattoo! 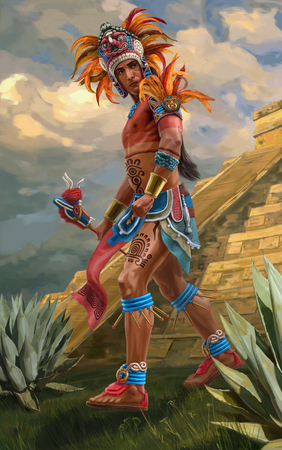 What did tattoos symbolize in American Indian culture?

The art of the tattoo was used differently depending on the tribe, but it was considered a sacred and spiritual ritual across Native American society. Individuals were often marked with symbols of protection and guardian spirit emblems. Some groups even attributed tattoos with curative powers and applied them over broken bones and sore joints to promote healing.

Many tribes used body modification to convey status, accomplishment, and identity. Even today it’s common practice for people of American Indian descent to have the individual art and symbols of their families and tribes memorialized on their bodies, just as their ancestors did.

Indigenous men, women, adults, and children alike adorned symbolic tattoos for many different reasons, depending on their tribe. In the Eskimo culture, for example, tattoos were a mark of femininity. Women were branded with their status and rank. A different line or image was given when a woman first menstruated, married, had children, and reached other landmark occasions throughout life.

Warriors, of course, proudly bared the tokens of their tribe on both their bodies and their weapons. Men were also honored with a new tattoo to symbolize accomplishment in battle or society and major milestones, like their first successful hunt.

How did Native Americans tattoo each other?

American Indian tattoos were applied using sharpened bone, rock, or another whetted object. The skin was pricked, and the design scratched in. The carvings were filled with soot and other natural dyes—like crushed up berries, plants, and minerals—used as ink.

One of the most interesting aspects of the Native American tattoo is how the most revered markings have translated to their other forms of art. The symbolism behind the patterns and images used in body art have proved timeless in how they inspire contemporary artists to interpret and express the values of their culture in new and innovative ways.

To see the most authentic and striking works of today’s top Native American artists, head over to the Faust Gallery in Santa Fe, New Mexico, or Scottsdale, Arizona! We offer a wide selection and variety of artists and mediums to explore that will impress individuals of all different tastes. Check out the art we have on display and available for purchase to get inspired for your next tattoo or simply add to your collection!